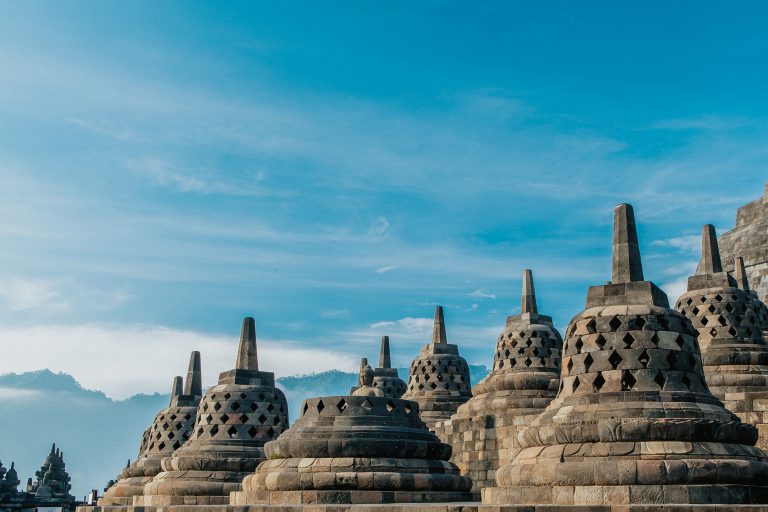 Buddhism is a philosophy or way of life-based on the teachings of Siddhartha Gautama. With about 500 million followers worldwide, Buddhism qualifies as a religion. It is a non-theistic religion, following the philosophical teachings and guidance of Buddha as opposed to a god or group of gods.

Buddhism’s roots back to more than 2 500 years ago. Gautama Buddha was born as Prince Siddhartha in Lumbini, what is today known as Nepal. He got married, had a son, and a life of luxury. Despite a life of comfort and luxury, the suffering he saw in the world moved him deeply. And this prompted him to give up his former life in search of more meaningful fulfillment. 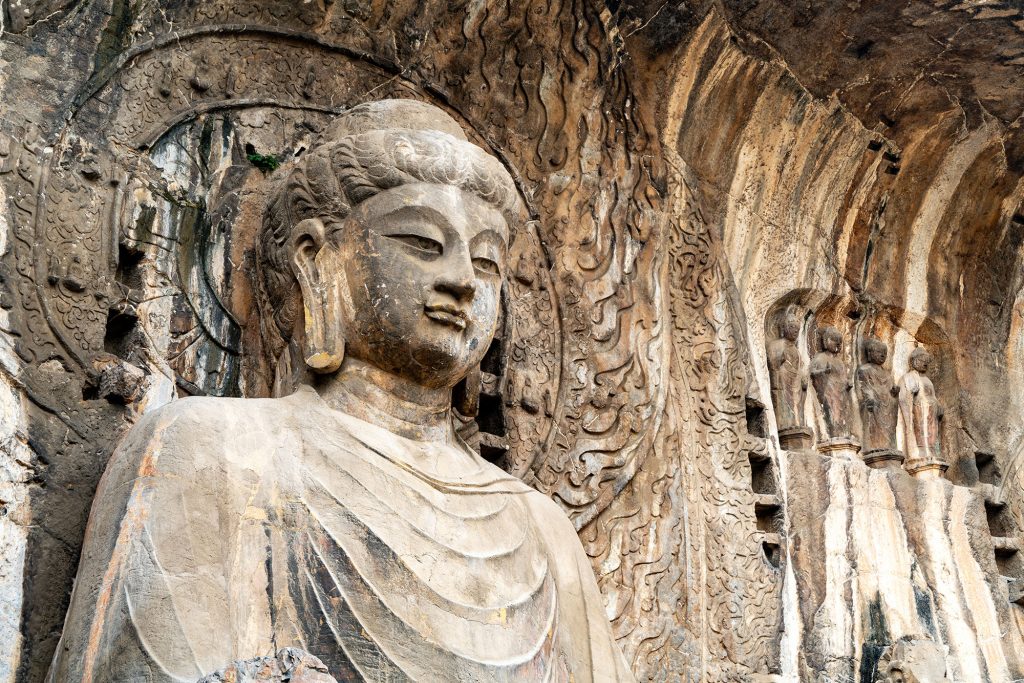 The Enlightenment of Buddha

After years of searching, he was found meditating under a Bodhi tree , in a place called Bodh Gaya, having reached enlightenment. He understood the cause of real suffering – in an ever-changing world, we humans always want to hold on to our positions, relations, and possessions. To put an end to suffering, we must surrender to and accept change. This realization freed him from ignorance and illusion, and he became enlightened or the Buddha.

After attaining enlightenment, he explained his belief on life in his Four Noble Truths:

As explained above, this path allows one to live a life free of desire and attachment, which can cause suffering. Also, to be noted that the path is an eight-fold path consisting of right view, right resolve, right speech, right manner, right livelihood, right endeavor, right mindfulness, and right focus and concentration.

As Buddhism grew, it evolved, taking on new meanings and interpretations amongst its many followers. The three main branches that have evolved are Mahayana, Theravada, and Vajrayana. In the 3rd century B.C. Buddhism became the state religion of India. Today it is most prominently practiced in East and Southeast Asia but has gained popularity and following in the West. 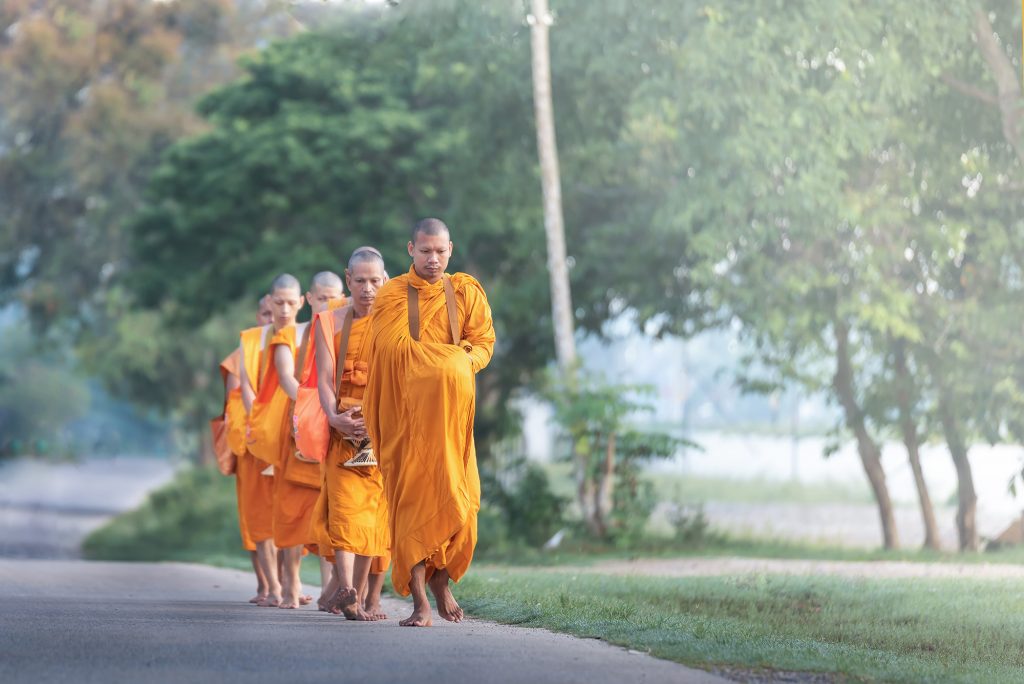 Buddhism Vs Hinduism and Other Religions

Christianity, Islam, Hinduism, and Buddhism are the four most widely practiced religions in the world. One of the main differences between Buddhism and these religions is that it is non-theistic, meaning there is no belief in a supreme god or deity. Other religions such as Shintō, Sikhism, Judaism, and Cao Dai also differ primarily from Buddhism in that they are all theistic religions. The three largest theistic religions also deal with sin and forgiveness, whereas sin is not a Buddhist concept. There is also no hierarchy of power within Buddhism. It also shares commonalities with other religions, such as sacred texts and symbology, attending places of worship, and geographical prominence.

With more than two billion followers, Christianity is the world’s largest religion. Its following grew in number due in part to the work of missionaries and colonizers. Buddhism differs in this regard: although its teachings are open and available to all, it does not seek to evangelize. Islam is the second-largest religion in the world, spread by the Prophet Muhammad. While Siddhartha is a central figure in Buddhism, he was an ordinary man and not a prophet.

Hinduism, the third-largest religion, is practiced primarily in India, Nepal, and Indonesia – sharing geographical terrain with Buddhism. Siddhartha was a Hindu prince, and his search for enlightenment came when India was experiencing significant religious and philosophical change. Just as Buddhism has gained prominence in the West, aspects of Hinduism (such as yoga and the use of chakras) have become popular in the Occident.

Buddhism is different from other religions in having had no holy war, but there is a history of Buddhist extremism and violence, particularly in Sri Lanka. However, Buddhism practices non-violence. As with other faiths and religions, this violence is not a reflection of its spiritual tenets but rather a reflection of its misuse in the hands of purported followers.

What is Buddhist Meditation

Buddhism considers awareness, balance, kindness, and wisdom as essential tenets in Life. By developing these, one gains insight into the nature of reality, the cause of suffering, and ultimately enlightenment. One can only achieve this through meditation. 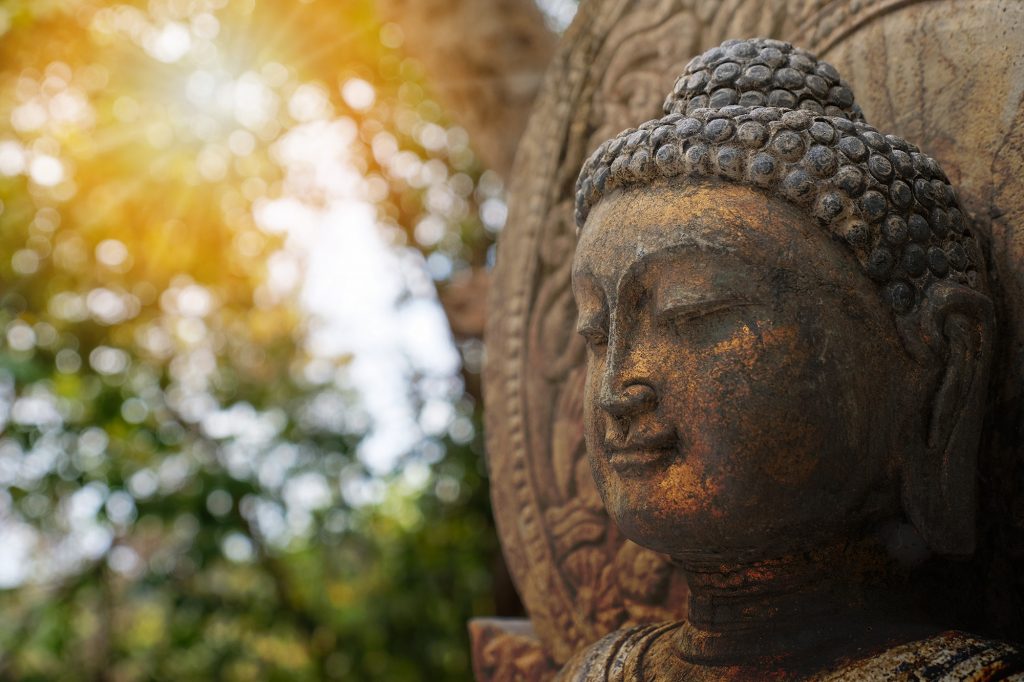 In Buddhism, to understand the world, one must be awakened. One of the tools used to achieve this is meditation. Siddhartha himself followed this practice, honing his skill under the tutelage of many teachers.

Practicing Buddhism is a process of change, which includes a modification of the mind or our thought process. Many things in life are beyond our control, but we have the power to change our minds. Meditation is a means of transforming the mind and achieving more positive states. Meditating takes on many different forms, but its ultimate goal is calm and positivity.

Meditation uses techniques such as visualization, loving-kindness, and mindfulness. Sitting comfortably on a chair or cushion and good posture and breathing techniques are central to the practice. There are many different forms, including Zen or Zazen, Vipassanā, and Shamatha.

Meditation is sometimes mistaken for prayer, but since Buddhism is non-theistic, meditation is not about reaching a higher power or being. Instead, it focuses on mind and body, reaching towards our potential and, ultimately, enlightenment.

Worship can take place at home or in and around Buddhist buildings and structures. Like many religions, Buddhism is renowned for its aesthetic places of worship. There are three types of Buddhist structures: stupa, vihara, and chaityas. Stupas are places to hold sacred relics. They originated as mounds of clay but evolved into extravagant objects of reverence. Stupas also contain small offerings known as tsa-tsas – the more of these a stupa has, the stronger its energy.

Viharas are an early type of monastery with an open court and residence for monks. Chaityas are shrines or prayer halls, later known as temples. Pagodas refer to stupas and temples collectively but often refer specifically to Chinese and Japanese temples. 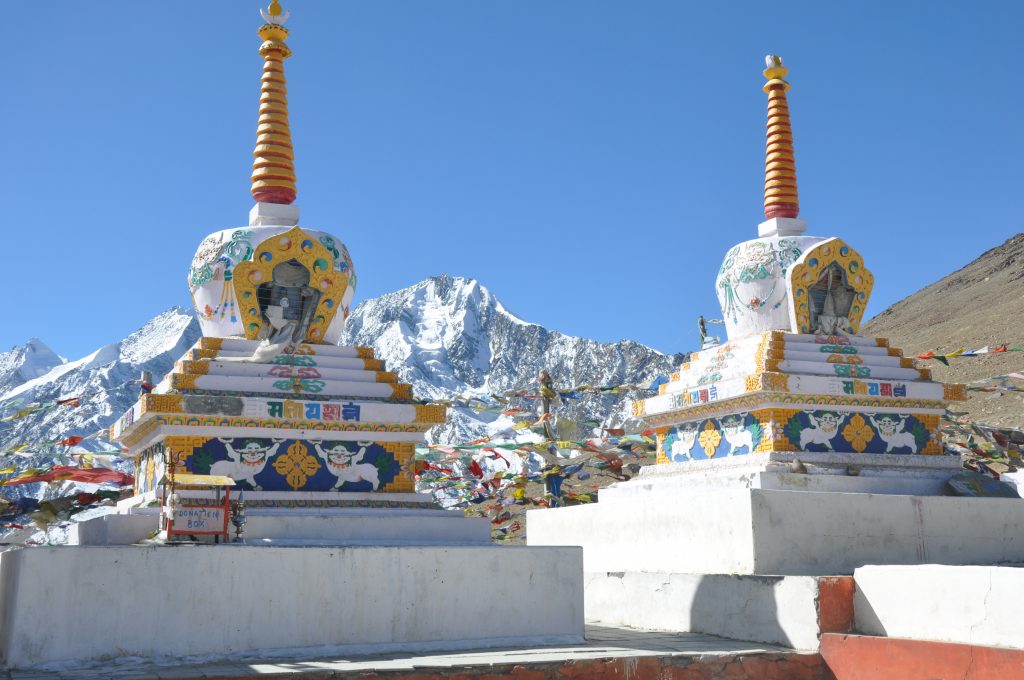 In many languages, the word for temple is the cave, and temples’ construction began with the hollowing out of rock faces. Gradually these temples became more complex and elaborate. The architecture of a country typically inspires the architecture of temples in that country. As a result, there are no two temples alike, but they sometimes differ significantly in style and design. Wat Benchamabophit in Thailand, Seiganto-Ji in Japan, Paro Taktsang in Bhutan, and Kye Gompa in India are examples of various Buddhist temples worldwide.

Temples usually contain objects such as Buddha statues, incense, fruit, and flowers. You may also hear bells tolling, especially around New Year and other special occasions. Temples face east or south, but never north or west as these are considered unlucky directions. The entrance is usually through the left door and the exit through the right. There is also the main hall with space for monks and other followers to worship. Temples have even become tourist attractions, and some have little shops selling religious souvenirs.the

Just as Christianity has the Bible, Islam has the Qurʾān, and Hinduism has the Vedas scriptures, Buddhism also has sacred texts. These include Tipitaka (considered the earliest collection of Buddhist writings), sutras (sacred teachings), and, describing the stages of death, The Book of the Dead.

Important symbols include the lotus flower, representing a vision the Buddha had of the human race as a lotus flower bed. The unfolding of the petals represents each human being’s ability to unfold their potential and grow towards enlightenment. 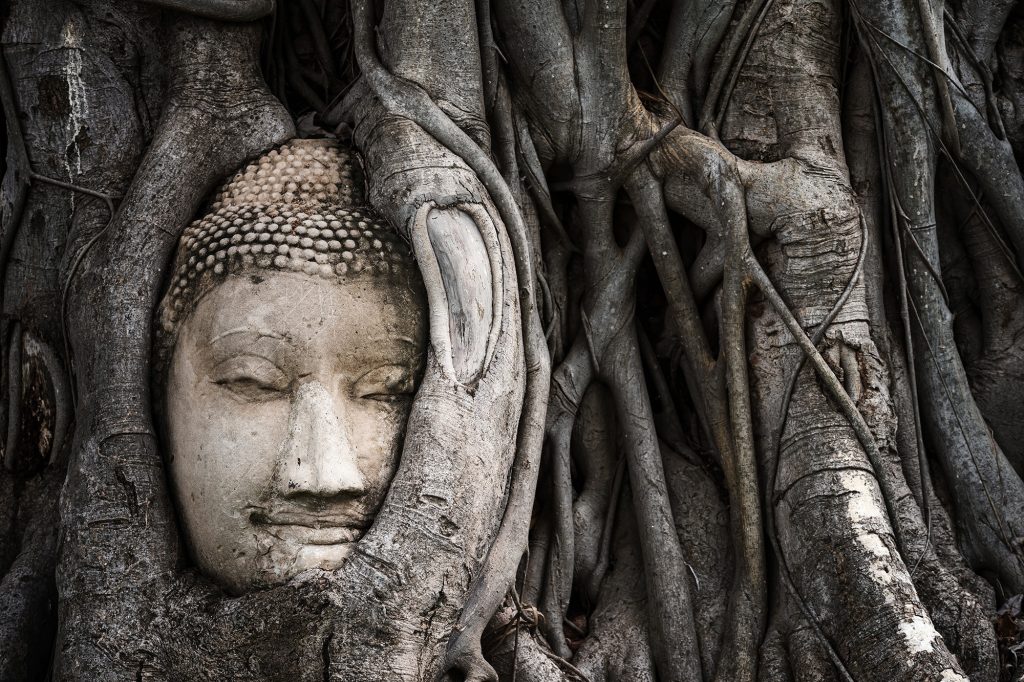 The Bodhi tree is another important symbol, as it was under this tree, the Buddha achieved enlightenment. Bodhi tree is the Fig Tree also known as The Tree of Awakening – Ficus religiosa. The leaf of the tree signifies the potential that lies within each practitioner to awaken as well. Bodhi is also a word that means ‘awakening.’

We often see statues of lions at the entrances of shrines, monasteries, and temples. Lions have a history of symbolism across many cultures and religions. It is usually a symbol of royalty and strength, and this is no exception within Buddhism. The lion speaks of the Buddha’s royal origins and his power to assuage suffering and further his teachings.

Buddha bowls are food bowls filled with vegetables, beans, and whole grains. They are more of a contemporary food trend, popularized by images on social media, than an actual Buddhist concept. However, these bowls represent the Buddhist principles of balance and, more literally, monks’ use of a bowl to accept food from the surrounding community.

The balance refers to the balanced nutrition offered by the ingredients in the bowl. They are also vegetarian or vegan, in line with Buddhist principles, which prohibit the killing of living things. However, not all Buddhists are vegan or even vegetarian, as some texts do not condemn meat-eating. 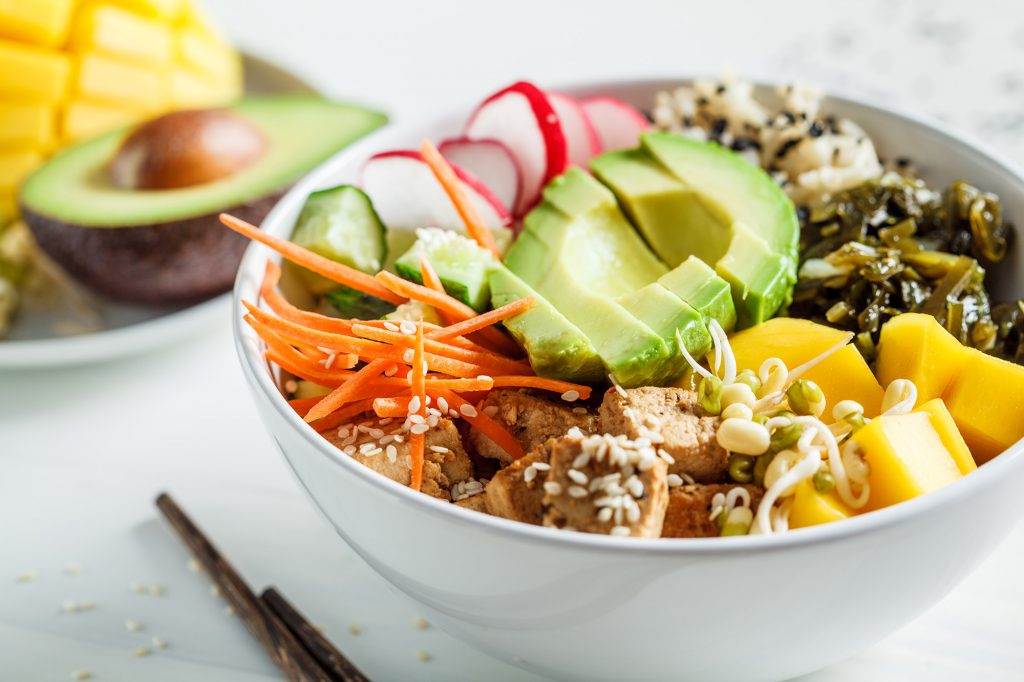 Although Buddha bowls are not Buddhist, they indicate Buddhism’s increasing representation in contemporary and popular culture and its growth as a global religion. In Western culture alone, we can see Buddhism in films, and T.V. shows many times over. In 1922, the German writer Herman Hesse published the novel, Siddhartha, following a man’s story of self-discovery in the time of the Buddha. And even further back, in 1903, Sir Arthur Conan Doyle was sending his famed detective Sherlock Holmes to Tibet to spend time with the head lama.

Buddha quotes are illuminating and full of wisdom. As such many people frame Buddha quotes to keep at the office or at home. Below is a small collection of a few of his famous quotes with which we intend to end this article:

“To live a pure unselfish life, one must count nothing as one’s own in the midst of abundance.” 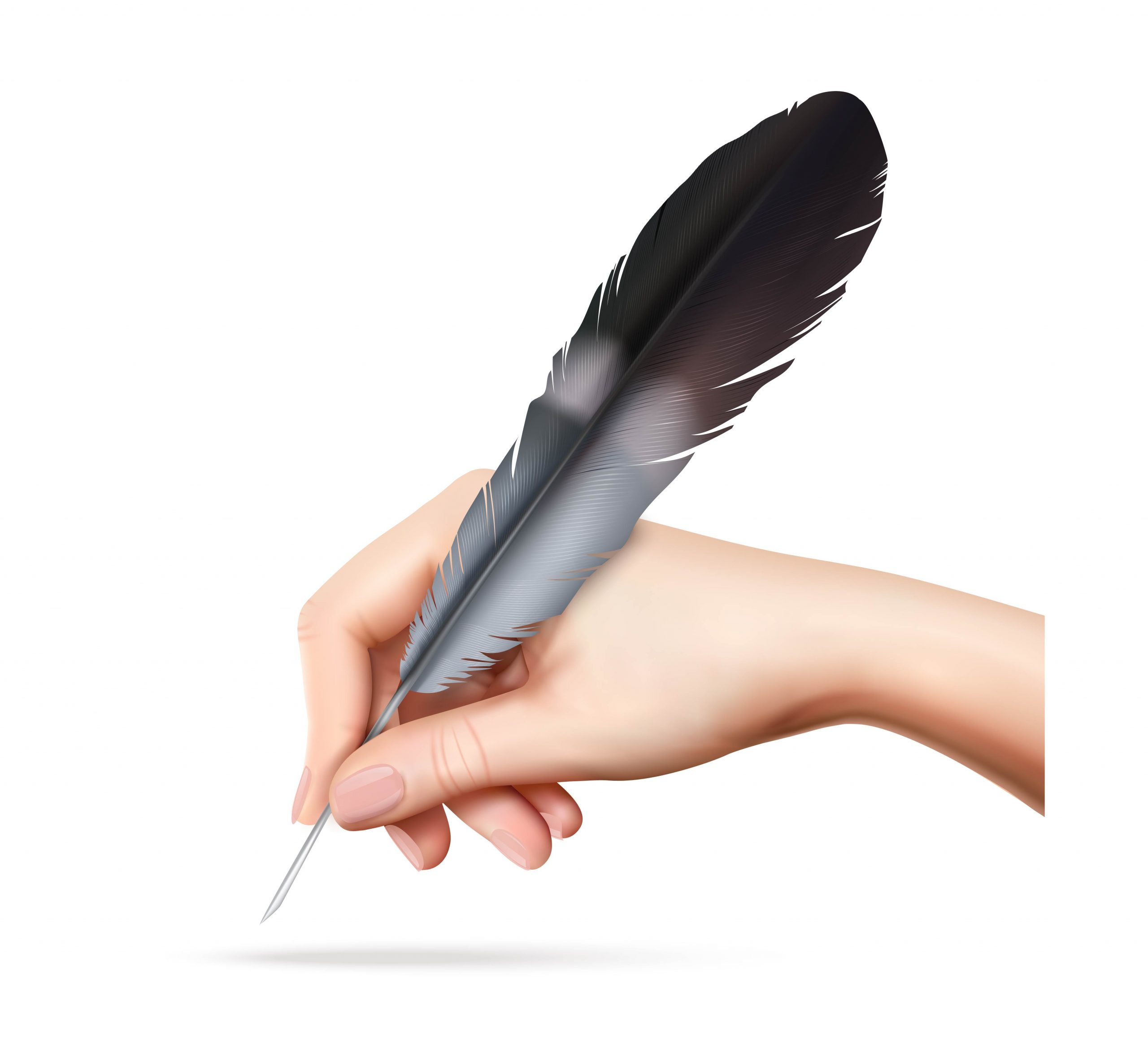 Claudia prefers to call herself a “writer of no wrongs,” which is a play on Don Quixote’s self-imposed title “righter of wrongs.” The reference is a tribute to her love of literature and her perfectionistic style, particularly when it comes to writing: whether it’s finding the best word to make a sentence work or editing and rereading and editing again until every last typo has been abolished from the page.
PrevPreviousVisualization Meditation – How to Visualize and Condition Your Mind
NextMeditation for Kids | Why Should Kids Learn MeditationNext 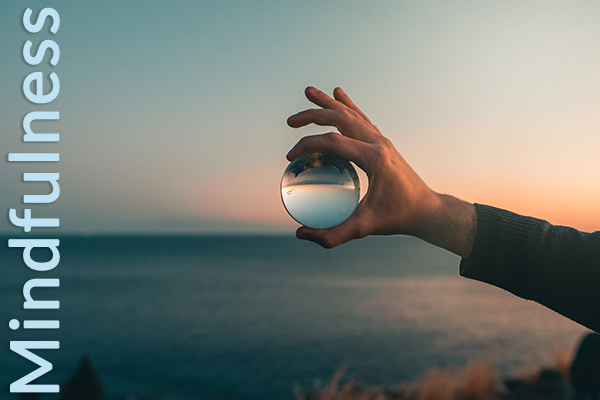 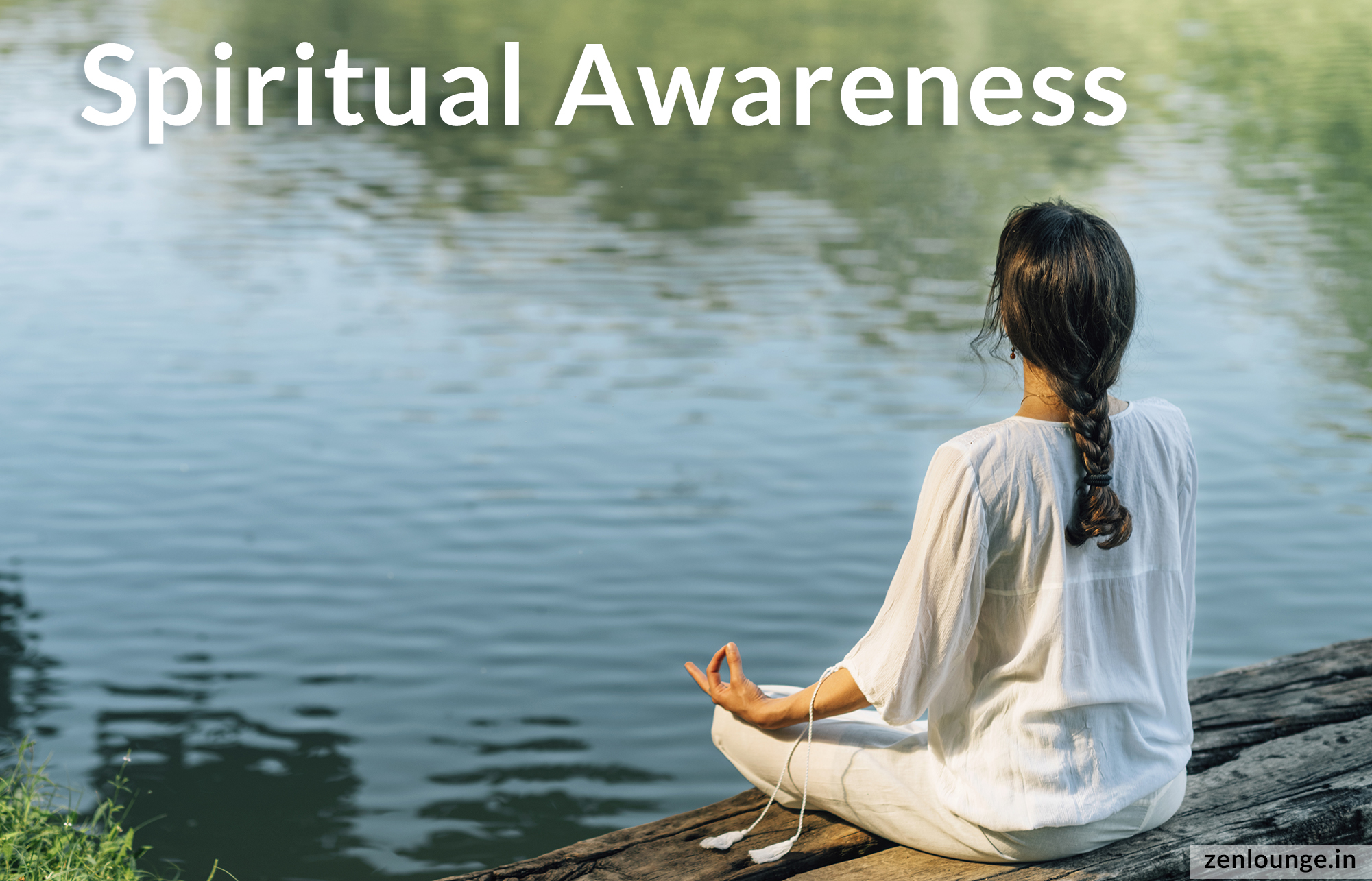 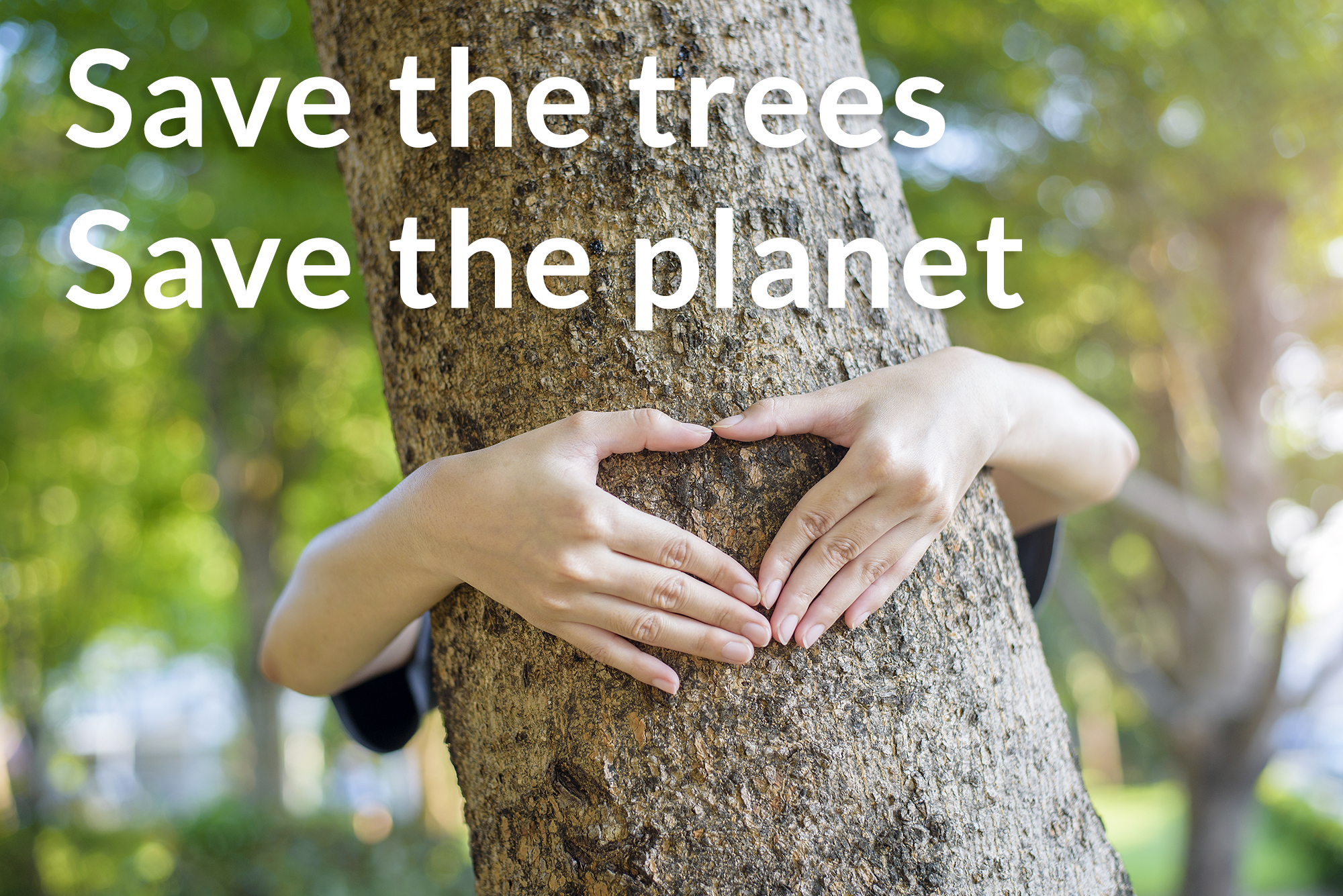 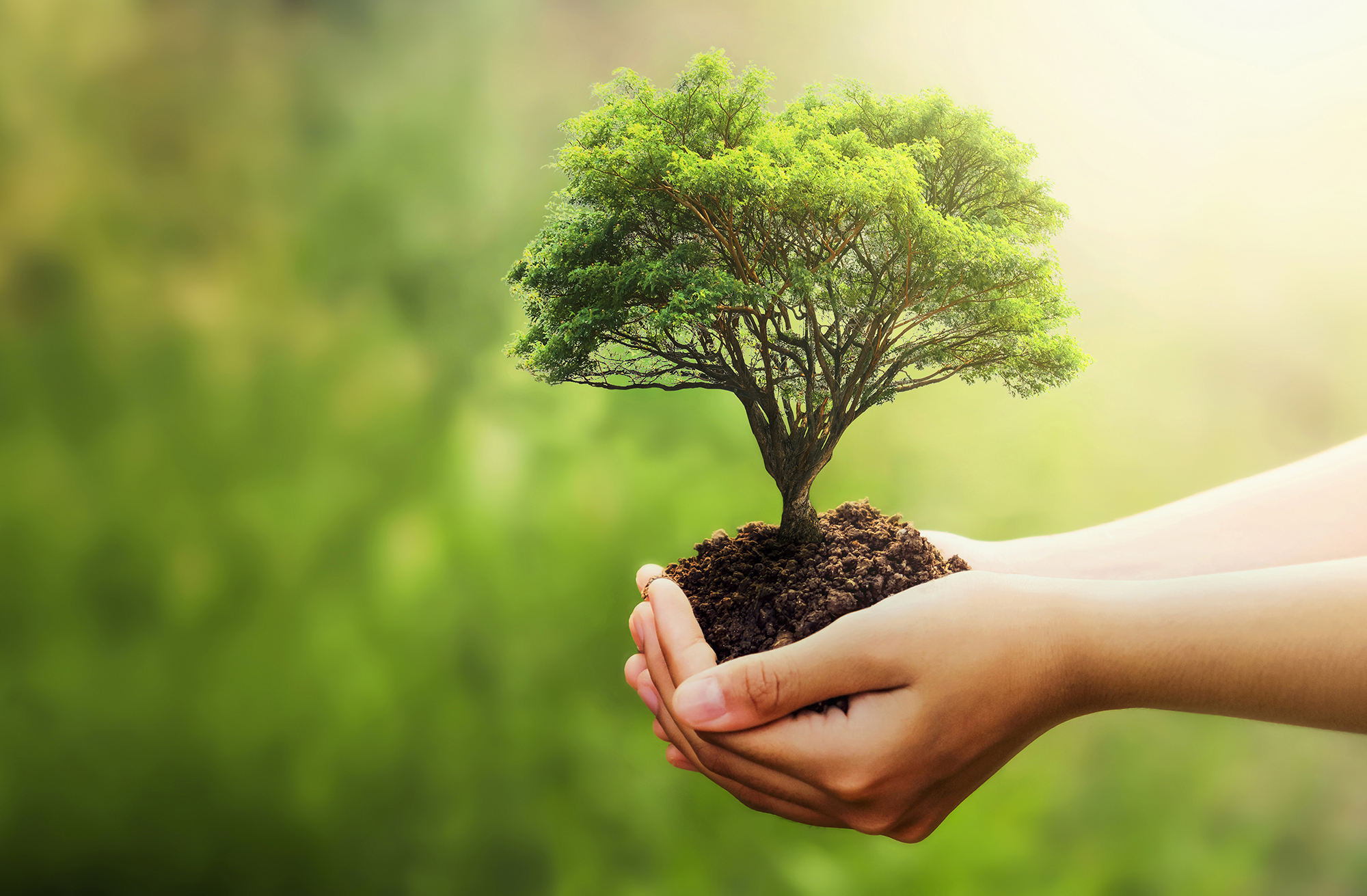 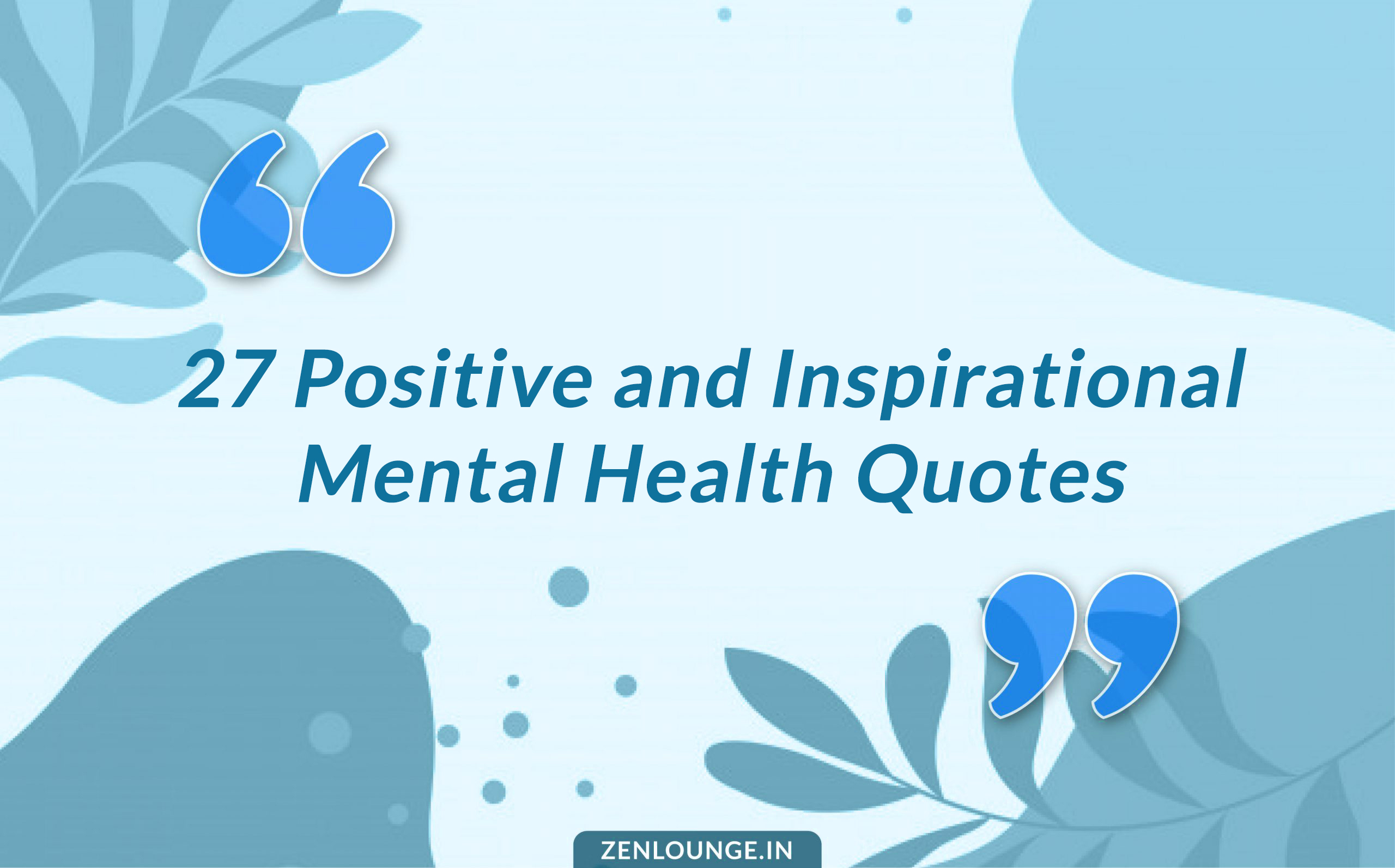 27 Inspirational mental health quotes from celebrities, authors with insights to inspire and help you understand your feelings better. 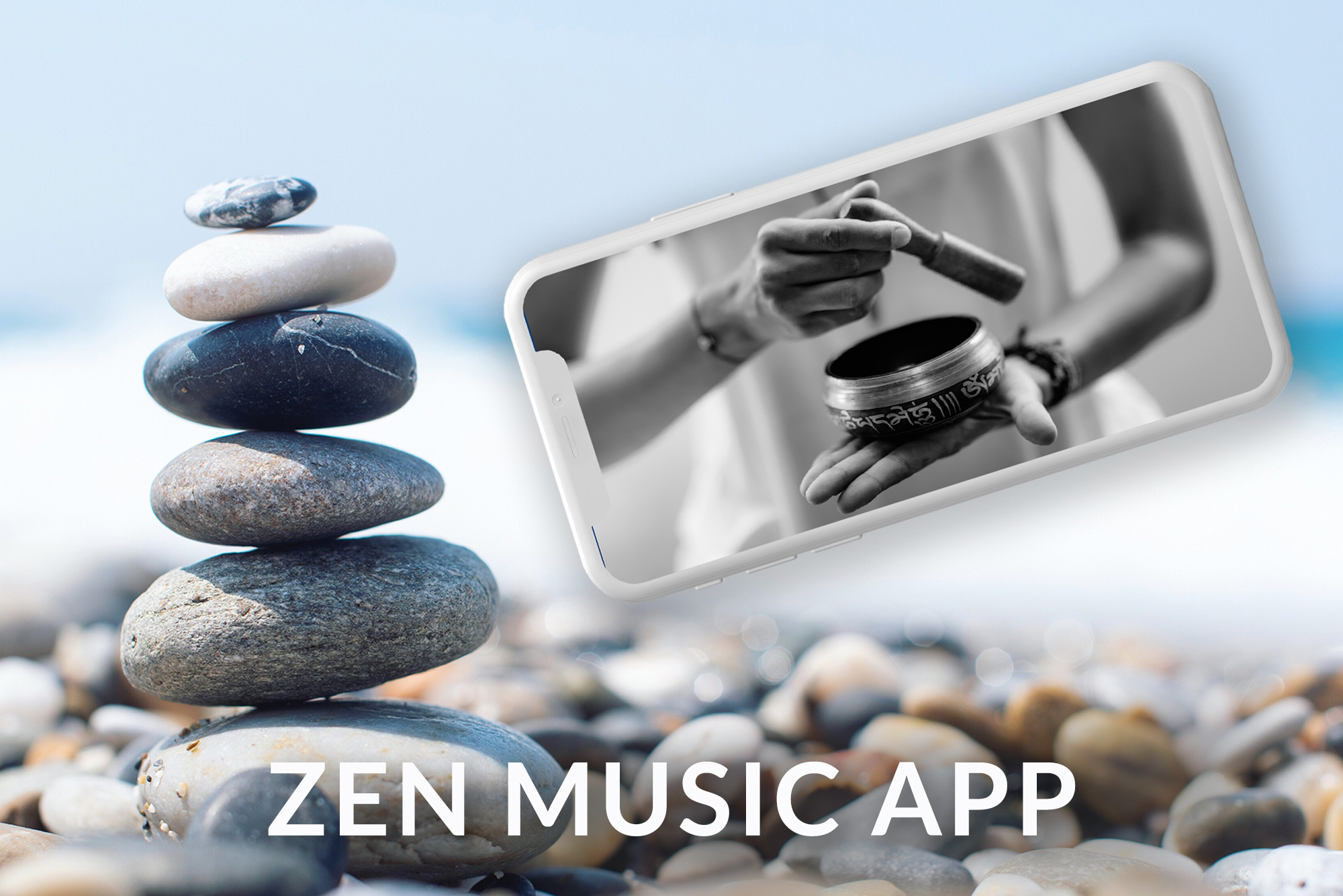 Feeling anxious, stressed, or depressed? This Zen music app is quite useful for stress, meditation, sleep, and focus. Yes, Zen Lounge is a free Zen Music App with selected soothing and relaxing music, creating the perfect natural ambiance at home. 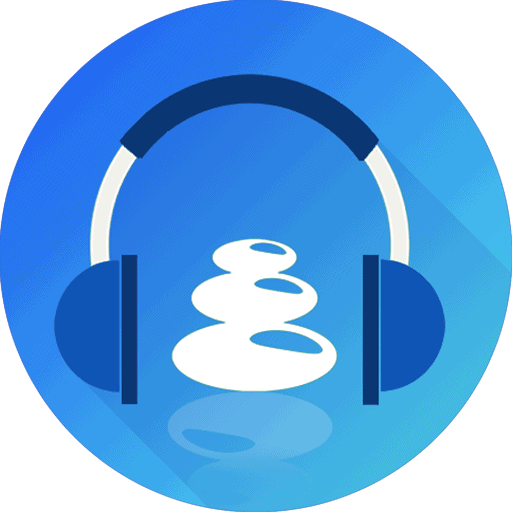